How To Interview Politicians

Trying to setup an interview with a politician or other public official, but not quite sure who to contact? Follow these steps to land an interview.

THE MINDSET: POLITICIANS WORK FOR THE PEOPLE 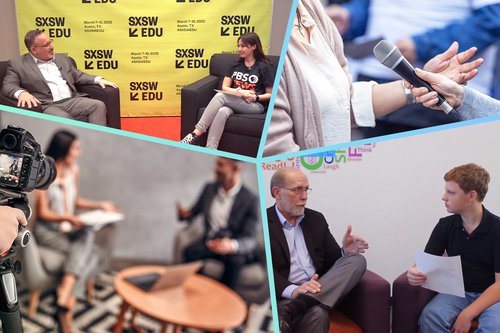 Elected officials at the national, state, and local levels work for the public—that’s you!

Keep in mind that when you ask thoughtful questions about public policy, you deserve answers. At the same time, treat all people, including politicians, the way you want to be treated. Even if you disagree with their policies, assume they are doing what they think is right. Ask well-researched questions in a respectful way and listen closely to their answers so you can follow-up.

Political campaigns are separate from the day-to-day operations of a politician’s work in office. Politicians have to keep these two things separate. Taxpayers pay for their work in office, because it’s part of running the government. Politicians have to raise money separately to run for office– so their campaigns are not part of the government. Keep this in mind as you think about who to reach out to for your story. What is your story about?

FIND THE RIGHT PERSON TO ASK:

Is your story about the election? Then reach out to the politician’s campaign. They should have a specific person on the campaign who handles press requests. Work with that person to schedule an interview.

Is your story about something other than the election?

If you’re covering an issue or policy the politician has been involved with that’s not related to their election and campaigning for office, then call the place where the politician works (city hall, state capitol etc.), say who you are and what you’re doing and ask who handles their press inquiries. Many elected officials have someone on their staff called a press secretary. It’s that person’s full-time job to handle requests from the press, so get to know that person! Work with the press secretary to schedule an interview. If the politician doesn’t have a press secretary, ask whoever answers the phone if they can share the politician's phone number or email address.

EXPLAIN WHO YOU ARE AND WHAT YOU’RE DOING: Depending on the size of your community, local elected officials may or may not be used to a lot of scrutiny and questions from the press. For any story, always explain who you are, what kind of article you’re doing, and where that story will be published (Example: “My name is {Your Name}. I’m a student reporter for {Your High School}, and I’m working on a story about healthcare, which will be published in our student newspaper next month)

GIVE THEM A DEADLINE: Be clear about your deadline from the outset, so they know how much time they have to get back to you

FOLLOW UP: No one responded to your interview request? That’s not uncommon. Keep trying! Email, call, or find them at an event in person and ask as many times as you need to until you hear a firm yes or no. If the answer is “no,” say you will be disappointed your audience will not have their perspective in the story, but don’t let their lack of response stop you from writing your story. Let your audience know that you tried and the politician declined to comment.

BE FLEXIBLE: Politicians are busy. If they can’t or won’t make time to sit down to do an interview with you, try to catch them before or after their next public event. Go out and find them!

PREPARING FOR THE INTERVIEW

SHARE TOPICS, NOT QUESTIONS: Sometimes politicians and/or their staff will ask for a list of questions ahead of the interview. Don’t do that! Tell them the topics you want to cover and the focus of your article (example: “I’m writing an article about healthcare and want to discuss the bill you sponsored last year.”) Do not give them a full list of your questions—you don’t want to get rehearsed answers.

SET THE AGENDA: Make sure you keep them on topic about what you came there to discuss.

PREPARE FOR ‘THE PIVOT’: Many politicians have mastered “the pivot” where they acknowledge your question, but don’t answer it, then pivot to talk about some other point they wanted to make. Prepare to hear those pivots. Get them back on track, so they answer your questions.

REPEAT YOURSELF, IF NECESSARY: Did the politician not really answer you? Did he or she give a very vague or meandering response? Ask the question again, in another way, to see if you can get a better answer.

ASK FOR EVIDENCE: Did the politician cite a study or statistic? Ask them how they know that information. Don’t use it in your story unless you know where the information came from and have fact-checked it yourself.

How does the NewsHour's Judy Woodruff prepare for a Presidential Debate?

Once you have all your video clips, edit a 2-3 minute profile piece and upload it to a video platform of your choice and tag us!

Journalism is the activity of gathering, assessing, creating, and presenting news and information.

Immediate, current information and events are newsworthy because they have just recently occurred. It’s news because it’s “new.”

People are interested in other people. Everyone has something to celebrate and something to complain about. We like unusual stories of people who accomplish amazing feats or handle a life crisis because we can identify with them.

A conversation between two or more people where the purpose is to gather information and facts. The interviewer asks questions and the interviewee provides information based on their knowledge about a specific topic or issue.